Global energy storage market has three main segments:
Segment of uninterruptible power supplies (hereinafter UPS).
Power system support segment.
Segment of storage devices in vehicles. The segments "UPS" and "Grid support" are the target for energy stores, because here storage devices are used to solve power quality problems on an industrial scale and are very attractive in terms of growth potential. According to the calculations of the US Electricity Research Institute (EPRI), current needs of the North American market for stationary energy storage costing up to $ 500 USA / 1 kWh are about 34 GW. According to the calculations of the consulting company IMS Research, the total capacity energy storage systems in hybrid systems with solar panels will grow on average by more than 100% during the next five years and will grow to almost 7 GW. At the same time, by 2033, the total capacity of energy storage devices on batteries will grow to 40 GW.

According to estimates based on data from Navigant Research, the global energy storage market will be $ 80 billion by 2025. The main reason for the growth is the large-scale development of renewable energy sources (stationary use to smooth out uneven generation) and electric transport (batteries for electric vehicles), directly or indirectly using storage devices. The driver is the technological progress in a number of solutions in the field of energy storage, capable of reducing the cost of systems in the short and medium term to a level acceptable to the market. 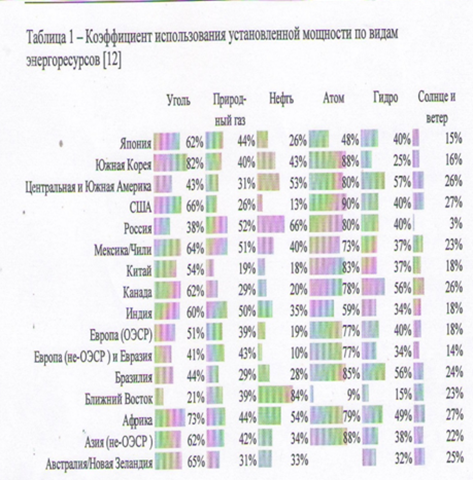 The average capacity utilization rate of solar and wind power plants (SHE) in the world is 20%, while coal exceeds 55%. This indicates the need to use savings electricity and raising the utilization factor of the installed capacity of the UHE to the level of coal. The most common method today is chemical batteries. The most perfect on today lithium-ion have a capacity of 100-150 W / kg. with a lithium price of about $ 700. US per kilogram. It is expensive to store significant amounts of energy with them. The environmental friendliness of such storage is also doubtful because lithium is an alkali metal, flammable and explosive when in contact with water vapor, which are always present in the surrounding atmosphere.

The attractiveness of hydrogen as a universal energy carrier is determined by its ecological cleanliness, flexibility and efficiency of energy conversion processes with its participation. The technologies for various-scale hydrogen production are quite well mastered and have an almost unlimited resource base. However, the low density of gaseous hydrogen and the temperature of its liquefaction, as well as high explosiveness, combined with a negative impact on the properties of structural materials, highlight the problems of developing efficient and safe hydrogen storage systems - these are the problems that are holding back the development of hydrogen energy and technology at the present time.


According to the US Department of Energy classification, hydrogen fuel storage methods can be divided into two groups. The first involves physical methods that use physical processes (mainly compression or liquefaction) to compact hydrogen gas. In chemical methods, hydrogen storage is provided by physical or chemical processes of its interaction with certain materials. Chemical methods are based on the interaction of molecular or atomic hydrogen with the material of the storage medium. This group mainly includes the following methods:
- adsorptive (zeolites and related compounds; activated carbon; hydrocarbon nanomaterials);
- absorption (metal hydrides);
- chemical interaction (alanates; fullerenes and organic hydrides; ammonia; spongy iron; water-reactive alloys based on aluminum and silicon).
It is potentially more efficient to store hydrogen in hydride form, since there is no need for bulky and heavy cylinders required when storing hydrogen gas in a compressed form, or difficult to manufacture and expensive vessels for storing liquid hydrogen. When storing hydrogen in the form of hydrides, the volume of the system decreases approximately three times compared to the storage volume in cylinders. The transportation of hydrogen is simplified, and the cost of hydrogen conversion and liquefaction is eliminated. The use of hydrides has significant advantages in safety concerns. A damaged vessel containing hydrogen hydride is significantly less hazardous than a damaged liquid hydrogen tank or pressure vessel filled with hydrogen. Great value when choosing Hydride storage hydride has the amount of hydrogen stored in the material, referred to a unit volume and a unit of weight. As a rough estimate, the metal hydride system provides storage per unit volume of three times more hydrogen, than when using liquid hydrogen. The joint work of Russian, Ukrainian, Norwegian scientists [4] indicates that the metal hydride method of hydrogen storage is characterized by high compactness, safety and low energy costs and, accordingly, has good prospects for creating efficient hydrogen storage systems. The release of hydrogen by thermal dissociation of hydride makes it possible to create hydrogen accumulators, for which a slight change in temperature and pressure in the system causes a significant change in the equilibrium of the formation reaction hydride. The industrial implementation of the absorption method is as follows: in a container with a hydrogen absorber alloy, equipped with a system of heat exchangers, hydrogen is supplied under pressure determined by the design of the electrolyzer. To maintain a high hydrogen uptake rate, the container is cooled with running water. After saturation of the alloy, contained in a container with hydrogen, such an energy receiver stores the accumulated chemical energy indefinitely long. To release hydrogen for the purpose of its use as an additional energy carrier with energy consumption, exceeding its production, hot water or steam is supplied to the heat exchanger system at 50 - 150 ° C. Part of the heat released during hydrogen oxidation can be used to heat water. It should be noted, that during the oxidation of 1 kg of hydrogen, for the desorption of which it is necessary to spend 500 kcal, 34,000 kcal are released in the form of heat, those. almost seven times more. At present, the technology of hydrogen hydride storage has left the stage of laboratory research into industrial applications. You can point to several manufacturers of serial production metal hydride storage.
⦁ American researchers have developed hydrogen storage system filling devices. "Refueling" is carried out at a pressure of 150 atmospheres for 10 minutes. The release of hydrogen from the hydride occurs when the material is heated, while the pressure in the system does not exceed 20 atmospheres.
⦁ At the Institute for Problems of Materials Science of the National Academy of Sciences of Ukraine, the laboratory "Investigation of processes and systems of hydrogen and helium-hydrogen energy conversion" (M.V. Lototsky) [5], an industrial prototype of an autonomous metal-hydride hydrogen accumulator was created. (Fig. 1.) The autonomous metal hydride reusable accumulator of hydrogen is intended for production, storage and transportation of hydrogen and its isotopes of high purity and can be used in various fields of science and technology. 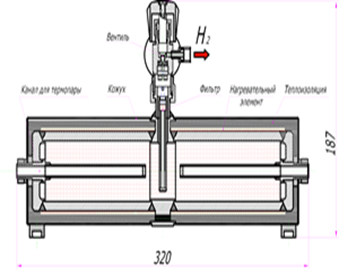 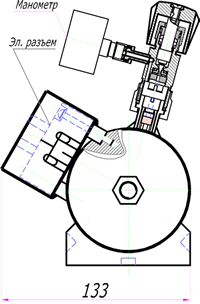 ⦁ The metal hydride hydrogen accumulator "H2store-1000" [6] is designed for compact and safe storage of a large amount of highly pure hydrogen. The hydrogen accumulator "H2store-1000" (Fig. 2) is a cylinder filled with an intermetallic compound of the AB5 type, capable of reversibly absorbing and releasing hydrogen. Depending on the chemical composition of intermetallic compounds, the working pressure of hydrogen at room temperature varies from 0.2 to 1.0 MPa. 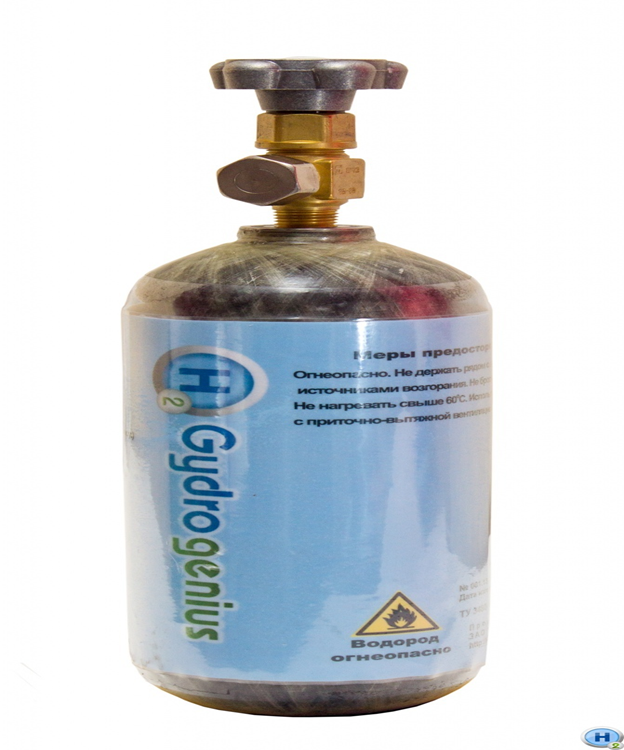 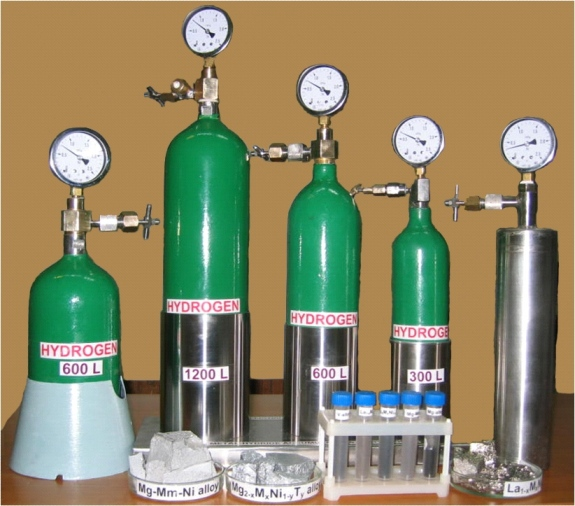 A typical design of metal hydride cylinders is shown in Fig. 4. 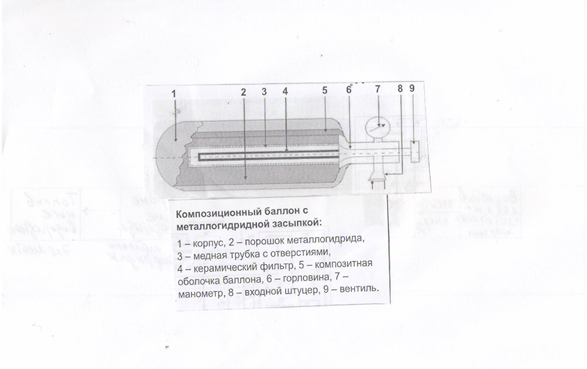 
⦁ Cryogenic storage.
At present, technologies for energy storage in the form of CES (Cryogenie Energy Storage) cryogenic liquid are rapidly developing. For this purpose, liquid nitrogen or air is used. In this regard, the technology is sometimes also called LAES (Liguid Air Energy Storage). 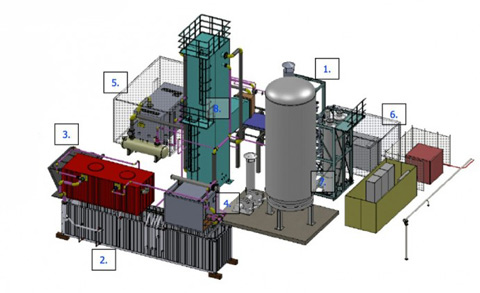 A complete CES system includes not only air liquefaction equipment, but also equipment that stores and recovers the cold produced at the outlet of the air turbine. The most important parts of the complex are the power generation system (2) and the cryogenic tank (1). The rest of the numbers show cryogenic equipment and several compressors (Highview Power Storage illustration).

CES exhaust is clean air, and quite cold. The British also suggest using it. For example, it is useful for air conditioning needs, for cooling industrial equipment or computers in data centers, and finally, to reduce the energy consumption used in the CES itself to liquefy air (which will increase overall efficiency).

Highview Power, a global leader in long-term energy storage solutions, has developed a modular cryogenic energy storage system based on CRYO Battery that scales to several gigawatts and can be deployed anywhere. This technology sets a new benchmark for a standardized storage cost of $ 140 1 / MWh for a 200 MW / 2 GWh 10-hour system. Unlike competing long-life technologies, the Highview Power CRYOB battery can be placed anywhere. 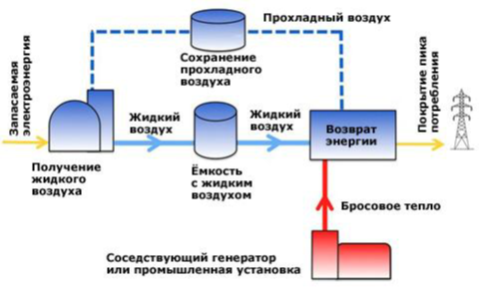 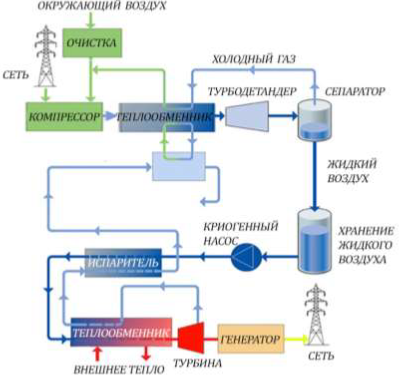 1. A liquefaction system is used, which turns on when there is an excess of electricity in the system. The air is purified, compressed, cooled by using expansion and throttling, and separated into phases in a separator. Liquid air is discharged into storage tanks, the vapors are returned to the cycle.
2. Storage of liquid air in insulated tanks.
3. Extraction of liquid air from storage. When there is an increased demand for electricity, liquid air is extracted from the storage facilities, gasified, and sent to a turbine to generate electricity.
Significantly increase the efficiency of the system due to the recovery of heat generated at the stages of technology.
- The chill of liquid air expansion, obtained in the third stage, is removed and used to cool the air in the first stage;
- On the contrary, the use of heat obtained at the stage of air compression is used to heat the air in front of power turbines;
- Use of waste heat.

To obtain 1 kg of liquid nitrogen, from 0.44 to 1 kW / h of electricity is required. For comparison, the production of 1 kg of hydrogen by the electrolysis method requires 53 kW / h.

The theoretically achievable useful work produced by nitrogen during evaporation from the liquid phase at a temperature of - 1960C to an ambient temperature of 200C reaches 770 kJ / kg. With additional heating of nitrogen in in a high-temperature heat exchanger up to 600-7000C, the useful work can be doubled up to 1400kJ / kg. Capital costs for the construction of liquid nitrogen power plants are estimated by experts to be about 1000 euro / kW, which is many times less than power plants with hydrogen storage. Energy storage in cryogenic storage is the cheapest today. So storage is 1MW / hour according to English estimates manufacturers will cost 110 pounds (3720 UAH). For comparison, storage of 1MW / h in lithium-ion battery 283 lbs (9565 UAH), which is 2.5 times more expensive.